Last week, as part of the spouse challenge, a woman named Teneka Griffin posted some pictures that were edited to make it appear as if she was is in a relationship with Jesus. She posted them with a long paragraph about her love for her man and although she never said his name, it was clear by the long hair and white robe that it was Jesus. It was clear that she meant it as a joke, but she received a lot of backlash from Christians who felt she was poking fun at a relationship with Jesus.

Yet, the truth is that when you hear some Christians talk about their love for God or Jesus you often are not able to tell that it’s not an actual person being talked about. I KNOW I am not the only one who grew up on Bebe and Cece Winans albums like Different Lifestyles and was like, “Wait. They’re talking about God? Not each other? This sounds like a R&B album. Whatchu mean they’re brother and sister? They aren’t married? Are you sure?“

I understood her humor because I am a former member of the Jesus is My Boyfriend Club.

I am not sure where this idea originated, but I picked it up from one of my friends along the way. I don’t know if any of my female Christian friends from college had not staked a claim to dating Jesus. How Jesus managed to date all of us at once I do not know. I guess that’s the whole connection to God thing. I never asked if he wanted to be in a relationship with me, but assumed it wouldn’t be a problem. I likened my devotion to a real relationship.  It sounds a little silly to me now, but at the time it made perfect sense.

Taking a deeper look, I think there are other reasons why we chose to be in a “romantic like” relationship with Jesus. In many cases,  a woman began to date Jesus as a reaction to something traumatic that had happened. Most often, a dude had done her dirty or her love life was not going the way she wanted and she needed to reassess her judgment around men. So, I’ve compiled a list of reasons one might say they are dating Jesus but would never admit.

1. It sounds more spiritual than saying you are taking time to work on yourself. 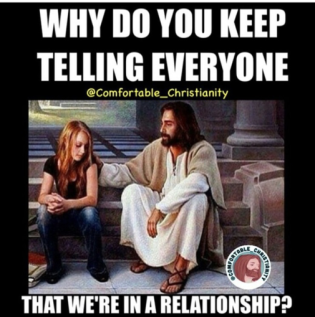 Nobody wants to be hurt or rejected albeit we all have experienced both. We have different ways of protecting ourselves. Some of us have addictions and habits. Some of us become hermits and hide away from people. Some of us are superheroes with super powers. Some of us have Jesus. Let me give you an example…

PD: Uh ok. Well, I noticed you standing here and wanted to come speak to you.

SSSHFC: (Thinks oh Lord this is NOT about to happen. I’m not ready. I’m not strong enough. My flesh is weak. Jesus take the wheel even though you can’t drive) Ok…

PD: Oh I’m sorry I thought you were here alone.

SSSHFC: Oh it’s ok. You can’t see him. He lives in my heart.

PD: Right…it was nice to meet you.

Now what if this was the man that you had been waiting for? Now you just scared him off, because he may have mistaken your eternal devotion to Jesus with being crazy.

3. You think you are going to have sex…right now. 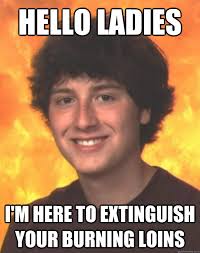 When you’re taught as a Christian that sex before marriage is a sin one of the worst things that can happen is having your loins burn. Loins are your sexual organs and much like telling a child not to touch something telling someone they can’t have sex makes you want to do the opposite. Seriously, abstinent people are some of the most sex crazed people I know. A lot of my conversations in my twenties were around getting married…so that I could have sex. You know what makes your loins burn? Men. You know who shouldn’t make them burn? Jesus. So, if you say you are dating Jesus then it puts up a loin preventing force field that keeps you from having sex. Until it doesn’t.

4. You really crave a relationship and fear you may end up alone. 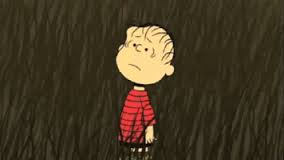 For some, an imagined relationship is better than no relationship at all. I had friends who were in fake relationships with men for years. You know what made them come back to reality? That man getting into a real relationship or marrying someone else. So, if Jesus just changed his relationship status we would all snap back into reality. But he won’t. Because he is Jesus.

I get it. You tried to do it right. You did it by the book. You are waiting to have sex until marriage. Yet somehow you still ended up with some chump in your church who cheats on you, gets another girl pregnant and marries her. True story. You really really want to give up on love, but at the same time you really really don’t. You question your ability to choose the right kind of man or wonder why you keep attracting the wrong kind of man. But you know who never lets you down? Jesus. So why not date him?

6. You take the relationship language in the bible literally.

I get it. I promise I do. It seems like the right thing to say. The biggest honor you could give God would be to devote yourself to Jesus wholeheartedly. Here’s the thing though. Shouldn’t we be devoted regardless of our relationship status? If we run around saying things like we are dating Jesus it suggests that we have to break up with him when it’s time to usher in real romantic love. We all have times where we need to detach from the opposite sex, but scapegoating Jesus doesn’t make us any stronger. Like the meme suggests, if Jesus was still physically present, perhaps this wouldn’t be what he would want at all. Perhaps he would want us to directly confront the issues and situations that make us want to hide behind him in the first place. How can you be in honest relationship with God or anyone else if you are not first honest with yourself? Conceivably, it is time to eliminate this notion from your arsenal so that we can deal with your issues head on.