For as long as I can remember I’ve had a wonderful love affair with the color blue. Although the shade has varied, teal almost always winning, I can‘t recall a time when it wasn’t my favorite color.  The walls in my apartment were blue, my office is blue, my dream car was blue, my 2014 birthday party was 31 Shades of Blue.

It’s such an awesome color that when the first new hue of blue was recently discovered, Crayola kicked yellow dandelion out the box to make room for this yet to be named crayon. (1) Score for the blue lovers of the world. Need more convincing of the amazing power of blue? It’s the favorite color of more than half the world’s people. (2)

I never thought my love of blue would give anyone pause until I gave birth to our daughters. Born in winter, we were gifted with blue car seat covers to keep them warm. EVERYWHERE we went people asked if they were boys. While it can be difficult to identify the gender of infants, never once did anyone think they were girls. Even if they wore the typical female markers (dresses, headbands, etc.), people seemed to be thrown off by the blue covers. In people’s minds, blue was for boys and pink was for girls. We had no problem gently correcting folks who were usually embarrassed and extremely apologetic.

But one night a stranger was a little too opinionated. I was leaving the grocery store with the girls and had them covered. A woman approached me in the parking lot and did the normal ooohh and aahhh over seeing two babies with the same face.

Her: Oh my God, are they twins?

Me (trying to hide the obvious duh look on my face): Yes, they are.

Her: How old are they?

Me (looks down at two babies with the same face): Yes.

Her: What a blessing! Two baby boys at once.

Her: What do you mean?

Me: They’re girls. Not boys.

Her: But they’re dressed in blue.

Me: They’re actually not. Their car seat covers are blue.

Her (in an elevated voice): Why would you do that? I don’t understand.

Me: Because I felt like it. These are my kids and I can put them in whatever I want.

Did I miss something? This conversation and her approach were problematic for many reasons. Mostly, I felt she was trying to socialize my kids into norms before they could even crawl. She had already determined there was something wrong with my little girls in blue. While silly to me, it got me thinking about where this phenomenon came from. Who the hell decided pink was for girls and blue was for boys? With all the advancements we’ve made in the world, why was this still a thing? 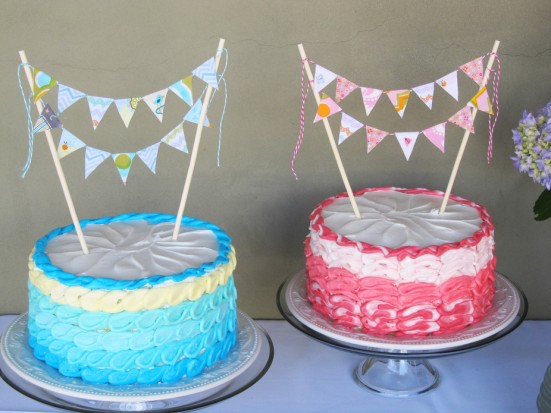 Turns out, the answer is not clear cut, but some key factors included: consumerism, toy companies and prenatal testing. Let me break down some brief history. For decades, babies wore white, because it could survive the inevitable baby blowout. If you’ve ever sun-bleached whites you know what I mean. In the early twentieth century, color differentiation began to rear its head. Companies realized they could make more money through color specific gender and sex distinctions. Even then, there was little agreement on WHO should wear pink or blue and whether the colors were masculine or feminine. (3) The chart below from a publication shows how some department stores listed blue as the color for girls while others listed it as pink. (4)

But it wasn’t just the clothing industry profiting. Walk through any major store and you can quickly identify the girl and boy toy aisles. (5) They didn’t stop at color, creating toys that spoke to the roles each sex should play. Barbie and EZ Bake Oven for girls. Gi Joe and sports equipment for boys. We can thank the eighties for beginning to solidify these trends especially with the advances in prenatal testing. Yes. A woman’s ability to pee on a stick, look for lines, find out the sex of those two little lines through an ultrasound, and make purchases based on those lines impacted us more than we think. (6)

Fast forward some thirty odd years and it all played a subconscious role in this woman standing across from me feeling she had enlightened me on motherhood. But it was more than that. Her irritation with me, a stranger, was about some deeper meaning she was making about the connotation of my daughters in blue. Her words were entrenched with evidence of the unasked question. It was as if I could hear her saying, “Aren’t you concerned that, if you start this now, they’ll want to be boys or end up gay?”

No. I was not concerned. At all. There are going to be all sorts of conversations we’ll have to have around sex, sexuality, gender, and who they love, but this was premature. Her wanting my daughters to not be in blue spoke to her bent towards normative parenting and socialization. Basically, she wants the world to work based on traditional societal norms. Norms where men and women perform a certain way. Where the labor in the household is divided by gender. Where clothing falls along a particular spectrum i.e. pink for girls and blue for boys.

Think it’s a stretch? It’s not. Her “concern“ is the elephant in the room that pervades these types of conversations. I saw it in her eyes. It was the same look given when a little boy plays with a doll or a little girl wants to play with the boys. In her mind she had inextricably connected my little girls and their blue covers to who they would become. Putting them in blue would start them on the trajectory down the road of identifying with maleness more than femaleness. Blue car seat covers would move to traditionally male dress which would move to traditionally male behavior so on and so forth. I guess she thought they were going to magically morph into men right in front of her.

Had she said it out loud I would’ve told her it doesn’t work like that. Wearing blue doesn’t make girls tomboys or masculine just as wearing pink doesn’t make them feminine. That gender and sexuality aren’t the same thing. (7) That gender roles don’t have permanency before the age of five. “A preschooler might ask his female teacher whether she was a boy or girl when she was little, or a little boy might say that he wants to grow up to be a mommy.” (8) That adults forcing their beliefs on children rather than guiding them through the journey of developing their identity and imagination may be what’s partially wrong with the world.

Somewhere there is a woman jacked up because, at age five, she told her parents she wanted to be a fireman. Her parents got all juiced up thinking it was something else and put her in a bunch of frilly dresses completely traumatizing her. Now she’s in therapy and estranged from her parents. If they had talked to her back then they would’ve known she only wanted to be a fireman because they had Dalmatian dogs. She connected that to firefighting. So she really wanted a dog. (11) Nice work.

“In other words, despite society’s stereotypes and beliefs, don’t assume that boys who like wearing the color pink will always have “feminine” desires or that girls who play with action figures will always have “masculine” desires.” (9) We want our daughters to know they can wear pink, blue or whatever color they want and it makes no mark on who they are. They can be drummers or dancers or something else altogether. The point is they will have the ability to choose. We don’t want them to make determinations about their lives because of others’ internalized messages. 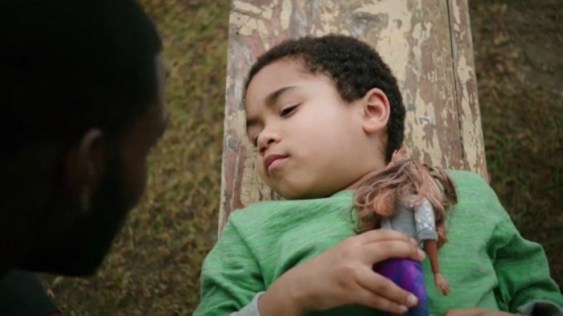 From tv shows to forums to news, gender identity amongst children is becoming commonplace conversation. One of my vices is TV. I watch great TV along with stuff that makes you feel like you‘re getting dumber by the minute. My husband and I can’t watch much together, but we can agree on Queen Sugar. (10) One of the main characters, Ralph Angel, has a young son named Blue. His name is the quintessential color of maleness. Blue has a doll he likes to play with named Kenya. It’s never overtly stated, but wafting in the air is a hint of connecting his playing with Kenya to what that may mean for him down the road. People don’t look at boys playing with dolls and think, “man that dude is going to be a really good father one day.” No, it has to mean something else.

It seems that everything has to mean something else. My girls in blue meant something else. Blue playing with a doll means something else. The problem is we never actually have healthy, open dialogue about that “something else.” That something else is whatever falls outside the lines of traditional roles. We want to be polite and PC and never admit we all have limits and boundaries to what we think is acceptable. Not just among children. We carry this into adulthood. Those unchecked thoughts can get really ugly and turn into some pretty hateful behavior. Why can’t these conversations be had in our homes, communities and churches? Why can’t folks who feel different ways on a myriad of topics sit across from each other and…talk?

Having daughters has made me ask some hard questions and deal with some hard truths. Do I have limits in what I think they can do and wear? How far am I willing to let it go? Would I feel the same way if I had sons? If I see behavior that is outside of my comfort zone, will I project meaning on it that it was never supposed to have? I don’t have all the answers. I do know I want my daughters to have every opportunity in the world. I want them to feel limitless. I want them to be whoever they’re called to be. Perhaps us asking ourselves the hard questions is where the conversation begins. So let’s talk.
Footnotes:

(3) Paoletti, Jo B. Pink and Blue: Telling the Boys from the Girls in America. Bloomington and Indianapolis: Indiana University Press, 2012. Print. XVIII

(7) The plainest way it can be said: “Sexuality is who you go to bed with, and gender identity is who you go to bed as. That’s the simplest way I can describe it.” Thanks YouTuber Brendan Jordan. Adams, Cydney. “The difference between sexual orientation and gender identity.” CBS News. 24 March 2017. Web 16 August 2017.  https://www.cbsnews.com/news/the-difference-between-sexual-orientation-and-gender-identity/